Sunday 15th May saw Kent Youth Trials Club hold Round 2 of the OSET Cup South, at the glorious venue of Rakins Wood, Gills Green, Hawkhurst. With 35 riders entered, spread across 5 classes and 4 routes set out, it looked to be an exciting day. A fair number of the entrants had camped over the night before, so it would be enlightening to see how an evening of BBQs, fun with friends and a late night would affect performance the next day. 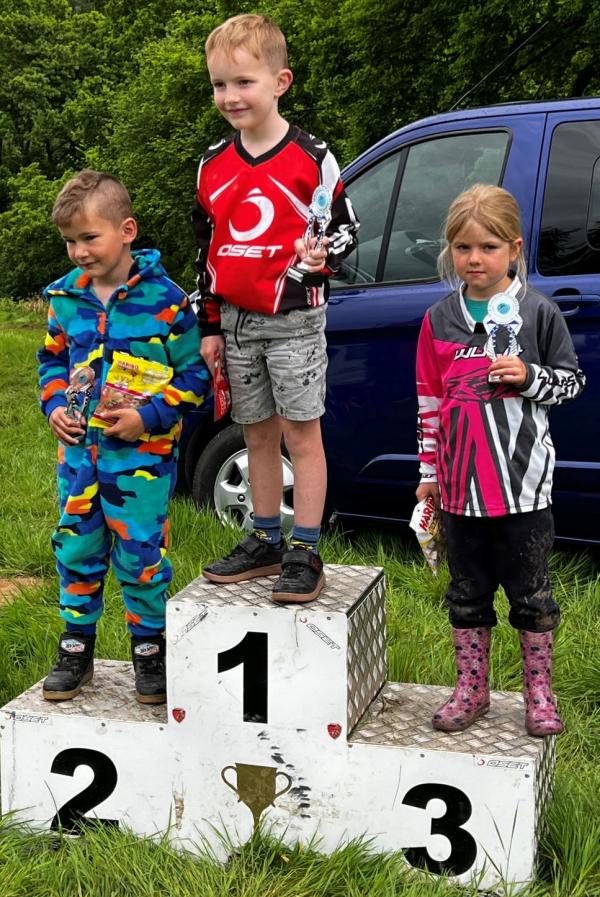 Sunday started early, and campers awakening to the familiar “pit-pat” of rain replied with groans of disappointment. Rakins, which still bears the scars of its former life as a motocross track, is notoriously difficult in the wet, and an un-forecast shower could be a game-changer. However, the rain sounded worse on a caravan roof than it actually was, and although there were repeated little threats of drizzle all morning, it was never heavy enough to penetrate the forest canopy, leaving the 10 sections dry (apart from the stream sections!). 3 laps awaited!!

In the Beginner Small Wheel class (12.5 & 16), the podium was a carbon-copy of Round 1, with Max Merron taking first place (a solid performance of 16 cleans and only two 5s), Sam Trevatt in second (hot off his win at the Essex OSET Cup two weeks previously), and Isla Dobson coming only 2 points behind Sam (only two 5s, but the real story here is her twenty 3s, she will be a force to be reckoned with when she starts converting those into 1s ands 2s). Henry Lingham and Jack White came in 4 and 5 respectively, and Jack Little (in his first trial) unfortunately retired after 1 lap. However, he then walked the whole course again, thanking each observer in turn! 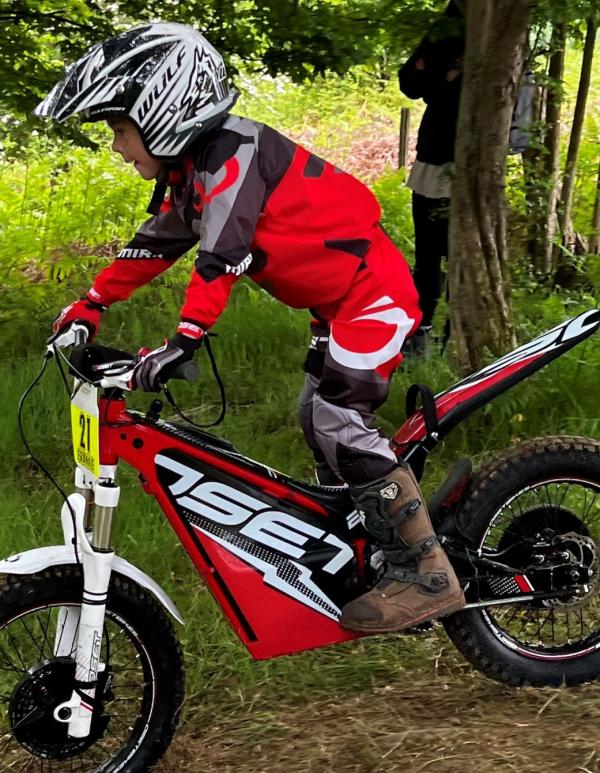 The Beginner Big Wheel class (20 & 24) has a slight variation in the route. One section requires them to tackle a Sportsman Route, and this was elected by the setting-out team to be section 8. This required them to divert to the righthand side of the large tree at the top of the hill, over one large root (instead of two smaller ones), before scrabbling across a camber and turning left to make the section end gate. This resulted in a number of 5s, as the larger root caught a few people out – a few of those who carried enough speed over the root lost the back end whilst turning on the camber, and those who’s rear wheel got stuck on the root span the back end along the root and scrubbed out the flag. Oliver Camfield was the only rider to not pick up a failure on that section all day. The podium finished with Joshua Silvester in first, Edward Mooney in second, and Freddie Stephens in third, just two marks behind Edward. Oliver Camfield and Edward Hutley-Kemp came in 4th and 5th, and Harrison Bloye retired after a bad start to his second lap, but scored on a par with the two boys ahead of him throughout his first lap - a fantastic effort for his first ever trial!

A large class (13 riders), the Sportsman route never fails to entertain. Notably, Celeste Phipps (10th) pulled out 13 cleans, but 2 places ahead of her was Jude Kjelstrup (who immediately moved up to Sportsman after winning Beginner Big Wheel at Round 1) putting in a solid performance of 14 cleans. At the top, Sonny Noble took the win with 18 marks lost, but the real battle was for the other two trophies. Zac Lovett and Alfie Scott battled all day, and with Zac picking up a failure on Section 7 and a dab on Section 8, it surely looked like Alfie Scott had clinched second spot. With them both going clean on Section 9 all day, it all hinged on Section 10. Alfie had struggled with Section 10 all day (his only failure of the day coming from there on Lap 1), and so he needed something magical. Alas it wasn’t to be, and a 3 for Alfie (with Zac going clean) saw Zac take second and Alfie take third place (34 and 35 marks lost respectively).

The Novice route saw 9 entrants, 7 of which did not ride that class last year. Dino Hatzidimos took the win (20 marks lost) – quite a sight to see as he throws that 20R around - with Nathan Blake second (23 marks lost) and Luca Lovett third (43 marks lost). Matthew Hann – wearing bandages from a bicycle accident – narrowly missed out on the podium with 44 marks lost. Further down the field there were good rides from Tristan Phipps (5th) and Lilly Wright (6th), and below them a close battle between good friends Toby Trevatt and Joshua “JJ” Griffin, with only 2 marks separating them (and only 1 mark separating them the day before at Round 3 of the KYTC Championship). Oliver Wakeman, who started at the end of last season on Beginner Big Wheel, moved to Sportsman at the start of this season, has found a place in Novice where he can challenge himself.

Only 1 rider on the Intermediate route, Fin Penny, however as this OSET Cup was held in tandem with the KYTC Championship Round 4, he didn’t have to ride the course alone. His freshly painted “Vertigo Green” OSET 24 held up well alongside the other Intermediate riders on their 2-Strokes, primarily its inability to stall giving Fin an advantage on some of the sections, as well as its lightness and ease to hop and skip into position enabling the OSET to excel on some of the tighter, twisty sections. 49 marks lost, 9 cleans and only 2 failures. But as far as the OSET Cup goes, a win is a win for Fin, and with 4 rounds to go there is still time for someone to move up and challenge Fin, maybe not for the Cup, but certainly for each round. The only question is who?