The 7th Round of the 2021 Cornwall Oset Cup was held at Trebarrow, Bugle on Saturday 30th October by the Camborne and Redruth MC. 36 riders took part over three laps of eight sections. Again we welcomed another newcomer into the Cornwall Oset family and this time it was 5 year old Edward Jasper who brought along his whole family to support him. All new Oset riders are particularly welcome and it is great to see the continued interest in riding Oset Cup events. 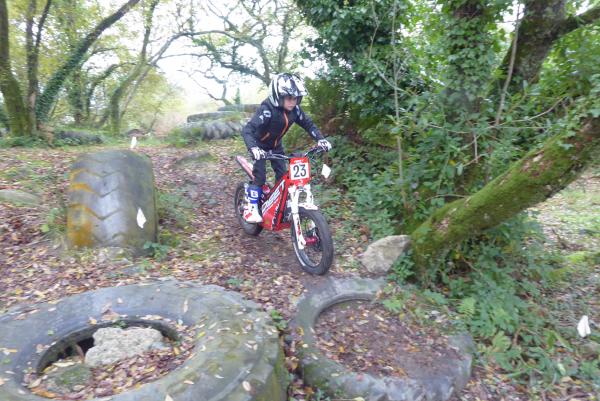 Oset bikes cope well in the wet and the mud but organisers attempted to ease the sections as far as possible following two days of torrential rain and thankfully all rain stopped on the day and the sun came out to make it a great day for everyone but there was still plenty of mud to play in.
The usual format of three separate courses for Hard, Medium and Easy again worked well with riders competing in their respective groups or age groups.
On the Hard Course, regular winner 8 year old Samuel Millmore again showed he was top man but close on his heels were two other 8 yr olds, Harvey Sanders who was just 5 marks behind and George Turner just another 3 marks adrift. George actually put in a spirited ride to clean 4 of the 8 sections which the others couldn't achieve but Samuel sneaked it at Section 2 , a series of steep slippery banks and gullies where he only lost 1 mark to George's 6 and Harvey's 7. 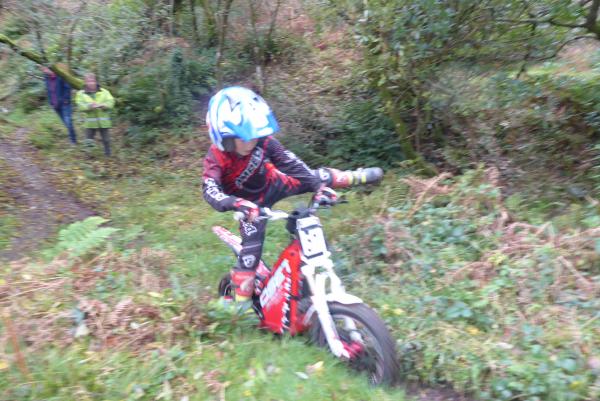 On the Medium Course the 9 year group were again on good form but the master was undoubtedly Riley Holloway who remained clean and lost no marks whatsoever, a brilliant result. Close on his heels though was Jack Kilby riding his new Oset 24 Junior but Jack lost 1 in Section 3 and another single 1 in Section 7. The 5 yr group had a great day with Kyle Bateman emerging the winner and losing just 8 marks with Riley Wales close behind on 10, all was however decided at Section 5 another series of slippery banks and gullies where Kyle remained clean and Riley lost a couple of marks.
On the Easy Course there were clear winners in each age group with Cody Holloway losing 50 marks to win the 7 year group, William Lewis losing 35 to win the 6 year group and best ride on this course goes to Finlay Wilson who had a great ride losing 23.
All riders received Oset Certificates as to their respective places in the trial and enjoyed a very welcome bag of sweets each.
The final round of this extended 2021 Oset Cup will be on 27th November at Colwith Farm, Par where Championship Positions will be decided and every rider will receive an Oset Medal courtesy of Oset Bikes UK.
Results:
Hard Course: Samuel Millmore 18, Harvey Sanders 23, George Turner 26, Jacob McCoan 41, Art Knowles 72
Medium Course by age:
12 yrs Isabel Polkinghorne 13
9 yrs Riley Holloway '0', Jack Kilby 2, Andrew Hancock 6, William Bloomfield 13, Dexter Tripconey 16
7 yrs Charlie Harris 9
6 yrs Charlie Riddell 31
5 yrs Kyle Bateman 8, Riley Wales 10, Josh Dustow 31
Easy Course by age :
10 yrs Archie Oliver 43
7 yrs Cody Holloway 50, Natalie Kilby 78
6 yrs William Lewis 35, Henry Smith 65
5 yrs Finley Wilson 23, Archer Tripconey 68, Edward Jasper 74.